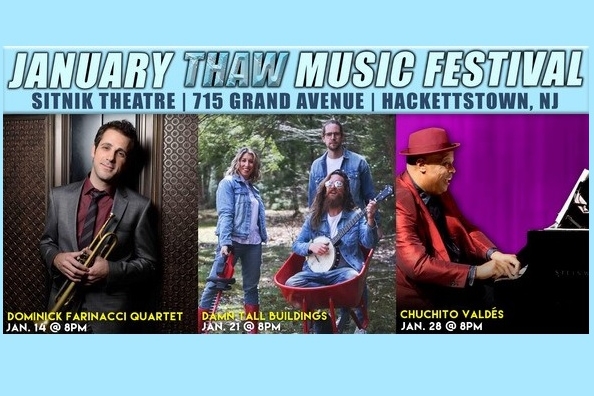 All performances will begin at 8:00 p.m. in The Sitnik Theatre of the Lackland Performing Arts Center on the campus of Centenary University at 715 Grand Avenue, Hackettstown, NJ.

Kicking off Centenary Stage Company’s January Thaw Music Festival will be a performance by Dominick Farinacci Quartet on January 14 at 8:00 p.m.  Named a Global Music Ambassador to Jazz at Lincoln Center by Wynton Marsalis, Dominick has performed in over 120 cities in 14 countries!

Then, join Centenary Stage Company as Damn Tall Buildings take to the stage on January 21 at 8:00 p.m.   Bluegrass at heart but pulling from a wide range of influences from swing to ragtime, jazz to contemporary, Damn Tall Building’s lyrics tell the story of the mundane while keeping to their message of “Carry on”.

Finally, the return of Chuchito Valdés on January 28 at 8:00 p.m. With influences of Caribbean rhythms and jazz, Chuchito Valdés creates an exciting and energetic blend of spicy music that drives audiences wild. He is recognized as a master of Cuban music and has also studied classical music extensively. This piano master captivates and drives excitement with his dynamic band. 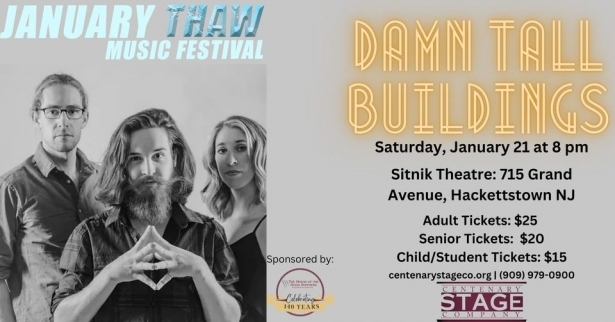 It's a swinging January at Centenary Stage Company! This Saturday features Damn Tall Buildings, a Brooklyn - based band who still radiate the energy of a ragtag crew of music students playing bluegrass on the street. But anchoring that energy is their instrumental chops, their strong songwriting, and their varied influences that stretch beyond bluegrass and American roots.