The Arts at St. Luke's presents the Jan Findlay Quartet 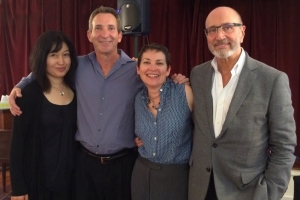 Jan Findlay has been singing professionally for more than 40 years. She started in local clubs as a teenager and performed with her husband, Bob, as Jan and Bog. She went on to the Manhattan cabaret circuit and became the Howard Williams Jazz Orchestra’s vocalist at venues such as The Manor, the Garage, St. Peter’s Church Midday Jazz and Tavern on the Green. She later sang regularly with the Jay D’Amico Trio for several years.

The Quartet has been together for nearly a decade and has played the New Jersey Jazz and Blues Festival, Sweet Sounds Downtown Jazz Festival and around Manhattan. Their home base, as a quartet and individually, is Shanghai Jazz in Madison.

The Quarter’s pianist is Tomoko Ohno who has performed with Wynton Marsalis and Benny Golson among other greats. She has played the Newport Jazz Festival, Lincoln Center, Weill Recital Hall of Carnegie Hall, The Blue Note, Birdland and Dizzy’s Club Coca-Cola. She is pianist for the Dizzy Gillespie Alumni Big Band and the Diva Jazz Orchestra and appeared on live radio on WBGO and WNYC.

Guitarist John Zweig started playing professionally at 15 in St. Louis where he was the Municipal Opera guitarist, a studio musician and in-demand for club dates and touring acts. He has accompanied Lou Rawls, The Temptations, Burt Bacharach, Henry Mancini and Les Elgart.

Bassist Rick Crane has played across the US and in London, Sweden, Japan and Moscow. He performed with the Benny Golson Quintet and is a longtime member of Richie Cole’s Alto Madness Orchestra. Among the musical greats he has played with are Bucky Pizzarelli, Joanne Bracken, Jeannie Bryson, Bernard Purdie and Claudio Roditti.

The Arts at St. Luke’s presents music every month at the historic Episcopal Church, 346 High Street, Hope. On and off-street parking is available. The Arts at St. Luke’s is partially funded by a grant from the New Jersey State Council on the Arts through the Warren County Bicentennial Cultural and Heritage Division of the county Land Preservation Department.