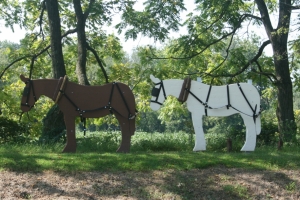 Warren County's two museums at Morris Canal sites, as well as Shippen Manor, are open for the afternoon.

The Jim and Mary Lee Museum is named for the well-known Morris Canal historian and his wife, who lived there for many years and who excavated the inclined plane remains. This unique museum is located in a former Morris Canal plane tender's house at Plane 9 West in the Stewartsville area of Greenwich Township. New animation depicting how Plane 9 worked debuts September 8. Visitors can view artifacts in the museum, then walk the inclined plane, and tour the remains of the powerhouse, turbine chamber and tailrace. The 165-foot tailrace tunnel and the turbine chamber, located 25 feet underground, reopened for public visitation after being closed more than a year. Guided tours are offered at 1pm, 2pm and 3pm.

Meanwhile, Bread Lock Park near New Village in Franklin Township is open daily until dusk, and the Warren Heritage Museum at Bread Lock Park will be open on Sunday from 1-4pm. The museum is featuring displays that interpret history along the Warren Heritage Scenic Byway, a state-designated scenic corridor from Lopatcong to Hackettstown. The Warren County Board of Chosen Freeholders recently authorized an expansion of the byway to add portions through Phillipsburg to the Delaware River, and beyond Hackettstown through Allamuchy to the historic Waterloo Village.

Lock 7 West near New Village was known as "Bread Lock" because the store at the end of the lock sold goods to the boatmen, including homemade bread and pies. In the museum you will find models and displays of Warren County history with emphasis on the Morris Canal, Shippen Manor, Oxford Furnace and Lenape Indians.

Shippen Manor, the restored 18th century iron master’s mansion, is located 1/4 mile west of the Route 31/Wall Street intersection in Oxford, on Belvidere Avenue. Parking is limited and visitors are encouraged to park on nearby Washington Avenue. Handicapped parking is available at the Manor. The museum is open the first and second Sundays from March to December, from 1-4 pm, excluding holidays. Admission is free, but donations are always welcome.

The Jim and Mary Lee Museum is a small museum located at the site of Morris Canal Plane 9 West. This site is the former home of the late James S. Lee, Sr., Morris Canal author and historian.