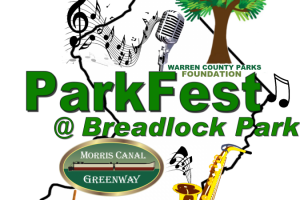 ParkFest will feature a lawn concert by three different jazz combos - bring lawn chairs or blankets to sit on - while artists will be displaying their work inside the barn that dates back to the days of the Morris Canal. Also on the grounds, look for "Authors Alley" where you'll meet a variety of fiction, non-fiction and children's book authors; a classic car show; local history displays; food vendors; and other entertainment.

The Warren County History Museum at Bread Lock Park will be open, with artifacts, displays, and working models on aspects of the county's rich history, from the days of our earliest Lenni Lenape inhabitants, to the Colonial period and the birth of the iron industry in the colonies, to the days of the Morris Canal - when the lock tender's wife baked and sold fresh bread to the passing canal boats, giving Lock No. 7 West its nickname - to Thomas A. Edison's nearby cement industry and the first "concrete mile" of roadway in New Jersey, and much more.

ParkFest is free, open to all, and reasonably accessible to persons with disabilities.

Need more information, or want to be a part of ParkFest with your classic car, your artwork, or your book? Contact us via email at morriscanal@co.warren.nj.us or call 908-475-6539.

Funding has been made possible, in part, by the Warren County Cultural and Heritage Commission.

ParkFest also thanks its additional sponsors:

Part of Warren County’s open space and park land, Bread Lock Park is a place where transportation history came together. It gets its name from the days of the Morris Canal, when the wife of the Lock No. 7 West lock tender baked and sold fresh bread to the passing canal boats. Remnants of the canal prism and foundations of canal buildings are visible, and a life-sized replica of a canal boat, full of cargo and riding low, has been erected there.

The site also adjoins the route of the Morris Turnpike, which was originally chartered by the State of New Jersey in 1806 as a toll road from Morristown to Phillipsburg. In 1924 it became State Highway Route 24, and later was renumbered as Route 57. This section of roadway across Warren County was designated in 2011 as a state Scenic Byway. Part of the road includes “The Concrete Mile,” the first concrete highway in New Jersey built in 1912 using concrete from Thomas Edison’s Portland Cement plant in nearby New Village.

Also along the Bread Lock Park property was the route of Easton Washington Traction Company’s trolley that began operating in 1906. The route between Phillipsburg and Port Murray paralleled the Morris Canal and the Morris Turnpike. Operation of the troll ceased in 1924, around the same time as the canal went out of business.

The lawn concert features three jazz combos quartets that will play from the stage built into the side of the Bread Lock Park barns. Bring lawn chairs or a blanket to enjoy The Louis Pettinelli Quartet (11am-1pm), The Jack Furlong Quartet (1:30-3:30pm), and The Dennis Melillo Swing Quartet (4-6pm) on stage.

Jack Furlong, a baritone sax player who is a Lafayette College graduate and holds a masters degree in composing and arranging from William Paterson University, fronts his quartet with BD Lenz, guitar, Tony Marino, bass, and Zach Martin, drums.

ParkFest will feature three screenings of local filmmaker John General’s documentary Extra 1104 - The Story of the Rockport Train Wreck.  The 1925 train derailment killed 42 passengers and five crewmen and injured 23 others, and stands as the deadliest disaster to ever happen in Warren County. John General found this forgotten chapter of county history and put together the 23-minute film, which will be screened inside the barn between sets by the bands, at approximately 11:45am, 2:15pm, and 4:45pm. Mr. General will be on-hand to discuss the film during the day.

Also showing during ParkFest will be two documentaries: Famous Tiller Sharks with noted Morris Canal historian James Lee, Sr., featuring first-hand recollections of people who worked or whose family worked on the Canal; and The Dig at Plane #9West about Lee’s excavation of the plane, turbine house and other parts of the canal inclined plane in Stewartsville, where he made his home for many years. That location in now county parkland and hosts the Jim and Mary Lee Museum in the former canal plane tender’s house, which was later the Lee family home. Both films will be playing on continuous loops throughout the day in the pavilion next to the Warren County History Museum at Bread Lock Park.

Visual artists – painters, photographers, and quilters – will display their work inside the Bread Lock Park barn, which dates to the mid-1800s. The barn was not associated with the canal, but with the farm that was along the canal.

The barn gallery also will include a special exhibition of the Morris Canal artwork of Richard Schisler, including many rarely seen works. In the late 1970s and early 1980s, James Lee, Sr. commissioned Mr. Schisler, a noted Phillipsburg area artist and personal friend, to paint Morris Canal scenes from pictures and postcards that were in Mr. Lee’s collections. A book containing all of the paintings was envisioned by Mr. Lee, which unfortunately was never accomplished due to his illness and advancing years. They spent many hours adding people and color to enhance the original subjects.

Many of Mr. Schisler’s paintings were sold to Warren County and remain in the possession of county government, while others are owned by the Lee Family and some are displayed at the Jim and Mary Lee Museum at Plane 9 West. Many of the paintings that have had only rare public viewings depict scenes on the canal in the eastern part of New Jersey, outside of Warren County.

Meet a variety of fiction, non-fiction and children's book authors. About 15 authors are planning to be there, and they will be set up under the pavilion that covers the live-size replica of a canal boat. Most if not all will have copies of their books available for purchase and signing.

Also, the Warren County Library system’s Bookmobile will be on the scene.

Anyone with a classic vehicle is invited to show cars, trucks and other vehicles. Dash plaques are awarded to the first 100 participants.

One of the participants is Don Eckel, who oversees a local family museum that houses his grandfather Earl Eckel's collection of "The Age of Steam". The collections includes a Stanley Steamer automobile, and numerous steam operated machines. Earl Eckel also owned and operated the first airport in America that was exclusively for autogyros, a forerunner of the helicopter. The airport was located in the Pleasant Valley section of Washington Township, Warren County, and the building is visible from Route 57.

The Warren County History Museum at Bread Lock Park will be open all day, with artifacts, displays, and working models on aspects of the county's rich history.

The museum is run by the county’s Morris Canal Committee and The Highlands Community Service Project, usually referred to as The Highlands Project. The museum is open one Sunday afternoon a month, year-round, but will be open throughout the day of ParkFest. Inside you’ll find displays on the county’s earliest residents – the Lenni Lenape – and those who came after.

During the Colonial period, Warren County saw the birth of the iron industry in the colonies, and the Morris Canal followed in the 19th century. Thomas Edison also played a big part in Warren County history, developing Portland cement and running a cement plant nearby, which produced concrete for the original Yankee Stadium and for “The Concrete Mile”, the first concrete highway in New Jersey that was constructed in 1912. The Concrete Mile is now part of Route 57, and part of it adjoins Bread Lock Park.  Also, the Valley View neighborhood in Phillipsburg has many pre-formed, modular structures made out of cement, another innovation of Edison’s.

Meanwhile, local history groups will be displaying at ParkFest on the grounds. Included are:

OTHER ACTIVITIES AND FOOD

Many of groups are participating, presenting or displaying at ParkFest. They include:
• Kaleidoscope Enrichment, a “science is fun” business, with activities for young visitors.
• Lydia Chiappini, who raises llamas and alpacas for their fiber on her farm, Heaven's Gate, near the Delaware Water Gap, will demonstrate spinning, and display and sell wearable llama wool art forms.
• Warren Garden Club
• Warren County Mosquito Extermination Commission
• Explore Warren County Tourism Partnership

ParkFest is hosted by the Warren County Parks Foundation, a grassroots, nonprofit organization composed of people who want to see open space enjoyed; and the Warren County Morris Canal Committee, an advisory committee to the Warren County Planning Board that promotes preservation of the canal and is working on a greenway where people can see remnants of the past while having a safe place to walk and bike.

The event is presented by a variety of Warren County government entities under the Warren County Board of Chosen Freeholders. Freeholder boards as far back as the early 1980s recognized the Morris Canal as being worthy of preservation, and established the canal committee consisting of volunteers who help identify and preserve parts of the canal’s 33-mile route through the county. Canal committee members volunteer at the two county-run museums and at other public events throughout the year, including the Spring and Fall Morris Canal Bus Tours, which stop at Bread Lock Park. The park stop is where tour participants enjoy the box lunch provided as part of the $20 tour ticket.

New Jersey Youth Corps of Phillipsburg, Warren County’s only full-time service and conservation corps, which helps to maintain parkland throughout the county. They provide hundreds of youth the opportunity to earn their GED while providing a valuable community service.

Boy Scouts of America Troop 56 will be on hand to help with set up and clean up activities. They have often used Bread Lock Park for camping events and helped with various park maintenance activities.

The Highlands Community Service Project is a nonprofit group of adult volunteers who work with youth that have community service hours assigned by the courts. The adults and youth have worked together to develop Bread Lock Park and the Warren County History Museum at Bread Lock Park. They also worked to support the County's efforts to develop County-owned open space properties for public use. The Highlands Project volunteers have been working with youth since 1998.

A picnic area, walking and exercise path, and Warren County history museum are located at this premiere site along the historic Morris Canal Greenway.