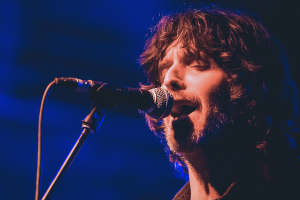 Scott began his music career in Wisconsin in the early ’90s. He spent his teenage years attending Milwaukee’s prestigious High School of The Arts by day, while playing in clubs at night sharing the stage with local blues legends the Stokes, Willie Higgins, and Harvey Scales, as well as international blues and jazz luminaries as Buddy Miles, Melvin Rhyne, and Clyde Stubblefield.

In the Fall of 2008, Scott joined the Gregg Allman Band as a touring guitarist, being hailed as “Gregg Allman’s secret weapon” by Glide magazine. He’s been called “One of the best guitarists in the country” by Billboard and “the next Eric Clapton or Mike Bloomfield” by the Indianapolis Star Tribune. Gregg Allman, has high praise for the guitarist. “I know all about guitar players —I’ve seen the very best — and Scott Sharrard is the perfect guitarist for my band. He understands that you don’t need to play just for the sake of playing; Scott isn’t one of those guys who think they’re getting paid by the note. He never steps on the vocals, and leaves plenty of room for everyone else to do their thing, but when it’s time to solo, Scott delivers, boy.”

Along touring with Gregg Allman, Scott continued to work on his solo career with his band, The Brickyard Band releasing a self-titled debut in 2012 embarking on a national tour soon after.

Scott developed a close musical relationship with Allman over the years and ultimately served as Musical Director for the Gregg Allman Band co-writing several songs with Allman. Scott’s song, “Love Like Kerosene” was included in Gregg’s Live DVD release, Back To Macon in 2015 and on Gregg’s final studio album Southern Blood released after Gregg’s passing in 2017. Recorded at FAME Studios in Muscle Shoals, AL, Southern Blood, where Scott served as musical director and lead guitarist, received a Grammy nomination for Best Americana Album and song, “My Only True Friend” co-written by Scott and Gregg, was nominated for Best American Roots Song.

Since the passing of Allman, Scott has been concentrating on the growth of his solo career while holding Gregg’s legacy near and dear as a guiding light and point of everlasting inspiration.

ROY’s HALL is operated by Blairstown Live-Arts, Inc., a non-profit 501(c)(3) cultural institution with the goal of promoting a broad appreciation of the interplay between culture and artistic expression.