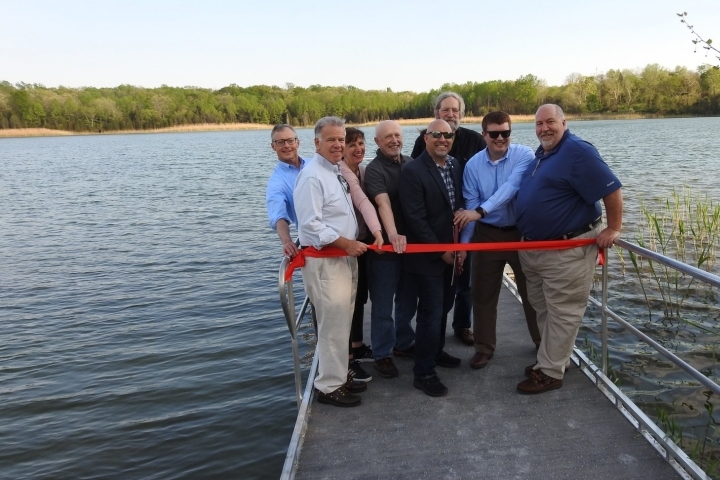 (HARDWICK TWP., NJ) - A new dock recently installed at the White Lake Natural Resource Area, Warren County’s most visited county-owned park, provides lake accessibility to visitors with limited mobility and allows for the easier launching of kayaks and canoes by those who might have difficulty getting in on the shoreline.

Extending 44 feet out into the water, the dock also allows visitors to fish without having to go out in a boat, as fishing is prohibited along the shoreline at White Lake in order to protect very rare plant species.

Warren County and Hardwick Township split the cost of the $10,000 dock, with the Warren County Parks Foundation also making a donation of $500 towards the expense. The Ridge and Valley Conservancy, which installed the dock and helps Warren County manage the site, reports that the dock is being used on a daily basis and that they have received an overwhelmingly positive response about the improvement from the park’s visitors.

Warren County’s White Lake Natural Resource Area is a beautiful 441-acre preserve located in Hardwick Township. The park’s most notable feature, White Lake, is a deep 69-acre spring-fed water body. The lake is named after the white chalky marl bottom which is composed of freshwater mollusk shells and clay. A variety of interesting habitats surround the pristine lake, including fertile meadows, karst limestone exposures, sinkhole ponds, and stands of mature hemlock and hardwood forests. The shoreline is also home to various endangered or threatened plant species. In addition, the preserve is dotted with several cultural and historical points of interest, including a lime kiln and the stone wall remnants of an ice house/marl processing facility.

Not only are visitors invited to paddle and fish on the lake for brown or rainbow trout, bass, sunfish, and even landlocked salmon, but the park offers an extensive trail system for hiking, biking, and horseback riding. Bald eagles, osprey, black bear, snakes, bobcats, and rare butterflies have often been spotted throughout the park. Open every day from sunrise to sunset, the main parking area is located along Stillwater Road and visitors can find more information by visiting www.warrenparks.com or calling the Warren County Department of Land Preservation at (908) 453-2650.