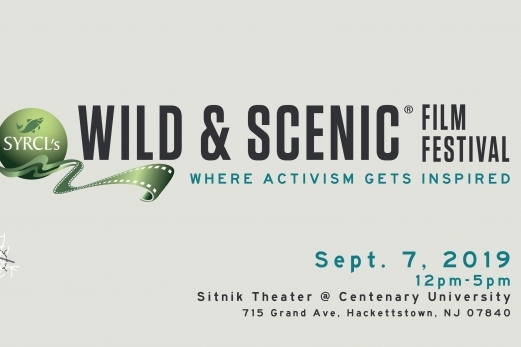 Join the Musconetcong Watershed Association (MWA) when they host the second annual Wild & Scenic Film Festival On Tour in the Sitnik Theatre at Centenary University, Hackettstown, NJ, on Saturday, September 7, 2019 at 12:00 p.m.

“We originally hosted this festival to mark the anniversary of the National Wild & Scenic Rivers Act, of which the Musconetcong is a Partnership Wild & Scenic River,” said Alan Hunt, MWA Executive Director. “We want to inspire people to visit and protect these national treasures that are right in our backyard – that is what the Act is all about.”

The Wild & Scenic Film Festival is a collection of films from the annual festival held the third week in January in Nevada City, CA, which is now in its 17th year.  Wild & Scenic focuses on films that speak to the environmental concerns and celebrations of our planet.

The Wild & Scenic Film Festival was started by the watershed advocacy group, the South Yuba River Citizens Leagus (SYRCL) in 2003. The festival’s namesake is in celebration of SYRCL’s landmark victory to receive “Wild & Scenic” status for 39 miles of the South Yuba River in 1999.  The 5-day event features over 150 award-winning films and welcomes over 100 guest speakers, celebrities, and activists who bring a human face to the environmental movement.  The home festival kicks-off the international tour to communities around the globe, allowing SYRCL to share their success as an environmental group with other organizations.  The festival is building a network of grassroots organizations connected by a common goal of using film to inspire activism.  With the support of National Partners: Peak Design, CLIF Bar, EarthJustice, Klean Kanteen, and Sierra Nevada Brewing Company, the festival can reach an even larger audience.

“In recent years, the festival and its On Tour Program has grown to more than 230 events, supporting organizations and their local community causes through outreach, fundraising, and education.  The On Tour community is an incredible collection of organizations from every corner of the country who are full of empathy, open-minded, and eager to make a positive difference for the world, their communities, and the environment,” says Sarah Muskin, WSFF On Tour Coordinator.

Featured at the tour event in Hackettstown are films highlighting the importance of rivers, the science of agriculture, and pollinators in nature.  Also featured is River Connections - a film highlighting the Musconetcong River. The festival is a natural extension of MWA’s work to inspire people to act on behalf of the environment.

The Musconetcong Watershed Association is an independent, non-profit organization dedicated to protecting and improving the quality of the Musconetcong River and its Watershed, including its natural and cultural resources.

Join the Musconetcong Watershed Association as we host our 2nd Annual Wild & Scenic Film Festival On Tour! This year's festival will feature films highlighting the importance of rivers, the science of agriculture, and pollinators in nature. Reserve your tickets now!