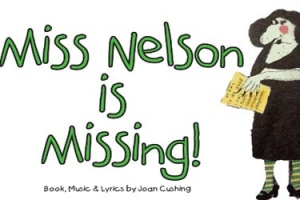 Miss Nelson can't control her crazy classroom because she's just too nice. But when she disappears, her substitute is the no-nonsense Viola Swamp! With the big test approaching, the kids suddenly realize how much they miss their Miss Nelson, and they'll do anything to get her back!

Tickets are $15 for adults and $10 for children under 12. Tickets and more information are available online at centenarystageco.org or by calling the box office at 908-979-0900

Miss Nelson is Missing (book by Mike Artell and adapted by Joan Cushing) is about, Miss Nelson, a teacher who’s just too nice. She can't control her crazy classroom full of ill-behaved students who take her kindness for granted. But when she disappears, her substitute is the no-nonsense Viola Swamp! With the big test approaching, the kids suddenly realize how much they miss their Miss Nelson... and they'll do anything to get her back!

School House Rock Jr. Live!, the Emmy Award winning 1970s Saturday morning cartoon series that taught history, grammar, math, science and politics through clever, tuneful songs is instructing a whole new generation to "Unpack Your Adjectives and do "The Circulations", this time on the stage! You’ll hear all of you favorite School House Rock songs in this production, originally adapted and produced for the stage by Theatre BAM from the series created by George Newall and Tom Yohe.

Polkadots: The Cool Kids Musical (by Melvin Tunstall, III, Douglas Lyon, Greg Borowsky) follows 8-year-old Lily Polkadot who just moved to the "Squares Only" small town of Rockaway. As the first Polkadot in an all Square school, Lily faces an almost impossible task of gaining acceptance from her peers. From daily bullying to segregated drinking fountains, Lily's quest seems hopeless until she meets Sky, a shy Square boy whose curiosity for her unique polkadot skin blooms into an unexpected pal-ship. Inspired by the events of The Little Rock 9, Polkadots: The Cool Kids Musical serves as a colorful history lesson for children, reminding them that our individual differences make us awesome, not outcasts.